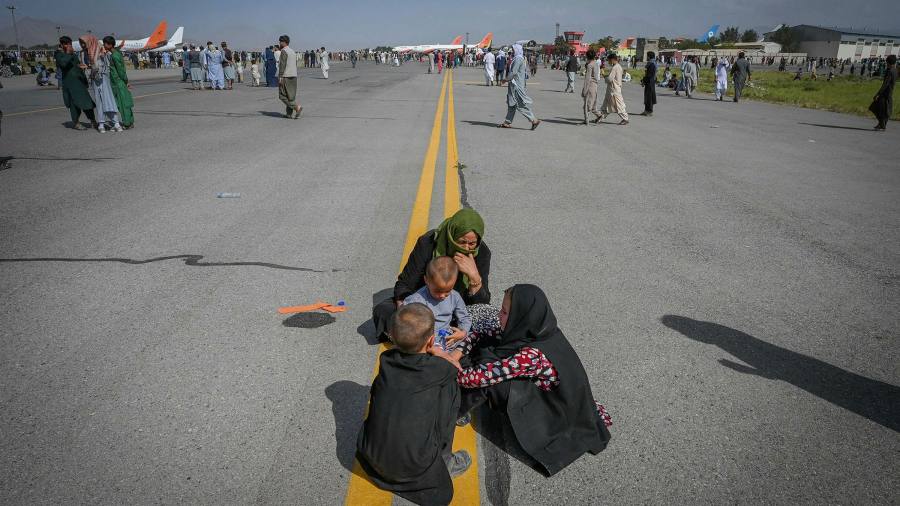 The Taliban has urged public officials to return to work and renewed a pledge to grant amnesty to government workers a day after Joe Biden blamed Afghan security forces for their rapid capitulation to the insurgents.

The Islamist group’s effort to reassure Afghans came as evacuation flights resumed from Kabul, following a chaotic day at the airport in which panicked residents mobbed aircraft to escape the country.

The Taliban said foreigners and Afghans in the country would be permitted to work on Tuesday, after the group swept aside President Ashraf Ghani’s government within hours after arriving at the gates of Kabul this weekend.

The militants ruled Afghanistan from 1996-2001 and imposed a brutal interpretation of Islam that largely extinguished women’s rights and deployed cruel punishments, including public executions and amputations.

“A general amnesty has been declared for all . . . so you should start your routine life with full confidence,” the Taliban said.

The Islamist group declared that the war was over and that they would create an open and inclusive government, though there were few details on the leadership structure or the substance of talks with Kabul’s political leadership.

After the initial chaos and fear of the Taliban takeover, residents of the Afghan capital cautiously returned to their daily routines on Tuesday. Tolo news, Afghanistan’s leading news channel, resumed broadcasting with women newsreaders. Traffic police reappeared on the streets and nurses and doctors began going back to work.

The Taliban have made repeated assurances that they want normal life to resume in the city but banks, markets and government offices remained closed.

There have also been stirrings of potential armed resistance to the militants. Amrullah Saleh, Ghani’s vice-president, has travelled to the mountainous Panjshir region, a bastion of Taliban opposition, and allied himself with Ahmad Massoud, the son of a charismatic warlord assassinated by al-Qaeda days before the terror attacks of September 11, 2001.

In Kabul, the US and other western countries have been working to evacuate staff and citizens.

Dominic Raab, UK foreign secretary, said the situation at the airport was “stabilising”.

“There’s been a surge of US and UK troops, we’ve got 600 extra personnel there. It’s critically important not just for the stability on the ground for Afghans but critically for our evacuation effort. We’ve made real progress,” he told Sky News.

The Russian ambassador, whose embassy in Kabul has remained open, was expected to meet the Taliban in the capital on Tuesday.

Biden used a national television address on Monday night to defend his decision to withdraw American troops despite growing domestic and international criticism of his execution of the plan to end the 20-year US campaign in Afghanistan.

The president admitted that the collapse of the country’s armed forces “did unfold more quickly than we anticipated” and called the panic in Afghanistan “gut-wrenching”. But he said the Afghan military’s lack of “will to fight” was proof that extending US troop deployments was wrong.

“How many more generations of Americans’ daughters and sons would you have me send to fight Afghanistan’s civil war when Afghan troops will not?” Biden said. “How many more lives, American lives, is it worth?”

“Afghanistan’s political leaders gave up and fled the country,” the president added, a reference to Ghani, who escaped at the weekend. “If Afghanistan is unable to mount any real resistance to the Taliban now, there is no chance that in one more year, five more years or 20 more years, that US military boots on the ground would have made any difference.”

Imran Khan, Pakistan’s prime minister, said that the Taliban had broken the “shackles of slavery” while China said it was willing to develop “friendly” relations with a Taliban–led regime in Afghanistan.

But some Afghans chafed at such developments.

“It did not have to end this way. I am disgusted by the lack of any planning by Afghan leadership,” Afghanistan’s acting central bank governor Ajmal Ahmady, who also fled the country, wrote on Twitter, accusing the former government’s officials of leaving “without informing others”.